Back Yards and Lazy Summer Days

When we were looking at houses last spring, one of the things that sold us on the house that we ultimately bought was the back yard. The previous owners had built a big deck off of the back of the house at some point that looks over a pretty slice of grass, perfect for lazy summer afternoon lounging.

We could imagine ourselves out there. The big outdoor table we would buy, the grill that would grace the corner of the deck, and the parties we would have under the stars on balmy summer nights.

Sure, there were some changes we wanted to make to the deck so it would be ours, but we fell for that back yard, and there was no turning back.

Except we moved into the house at the beginning of November.

A week later it started to snow, and until about three weeks ago, it never stopped. So instead of enjoying our brand new outdoor space, we sat in the living room, gazing longingly at the empty, snow-covered deck, and dreaming of summer.

Well, spring may have been slow to come to the Northeast - and judging from the temperature outside today, it may be another week or two before warmer weather is really here to stay - but at least it stopped snowing. And this past weekend, David decided it was high time to start using the back yard. But before we could start using it, there was work to be done.

Because while the snow fell in New York, David was busy planning our outdoor oasis. He was researching landscaping, scouring the stores for patio furniture, and learning how to rebuild and stain a wooden deck so we could remove the wheelchair ramp that the previous owners installed and change the color of the wood.

He knew exactly what he wanted, and I was just along for the ride, which suited me just fine, since that's exactly how I ended up with my really terrific kitchen.

And this weekend, it was time for some demo. 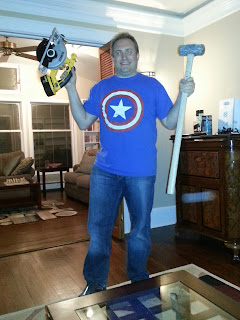 With sledgehammer and saw in hand, David went to work, and before long, our deck looked like this: 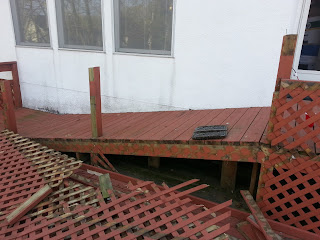 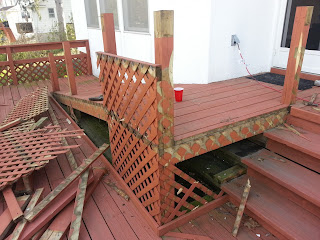 It may look like a bit of a mess right now, but I've seen the designs so I know that in a few weeks, it will be absolutely fabulous, just in time for Memorial Day.

Anyone for an early summer BBQ, Chez Merel?