Right Where I Left It

I put the bottle of water on my desk Friday morning, but the day got away from me. Then I was rushing out the door and the bottle was still unopened. I was too lazy and my back hurt too badly to walk back around my desk to get it, so I left it there.

I figured I would drink it on Monday.

It was 4:17 on Tuesday morning and the sky was just beginning to lighten when the nurse handed me my newborn baby boy. He wasn't crying, which surprised me. His huge eyes scanned the room, observing his new surroundings. For a second his eyes locked on mine. "I have a baby now," is what I thought.

The traffic home was hideous, as expected. Ninety minutes in to what should have been a forty minute drive home I needed a snack and a bathroom. I really wished I had taken that bottle of water.

Heat was shimmering from the asphalt street when I walked through the revolving door of the hospital. Sweat seeped down my back as I sat on the bench with the car-seat beside me, waiting for David to bring the car around. I looked at my baby, swimming in the newborn-sized alligator sleeper that I bought at Target two weeks before, and wondered if he was hot. It occurred to me that he probably had to eat soon and that his diaper hadn't been changed in awhile because no one told me to change it. I was failing at motherhood already. I was tired down to my bones.

It took two hours to finally get home. I used the bathroom and had a snack. I talked to my family on the phone and assured them that no baby had been born yet. I spent the rest of the weekend alternating between laying on my outdoor couch and my indoor one.

"I have to go," my friend said at the end of our phone call. "We're going to the Yankee game." Drowning in diaper changes, bottles, 3am feedings, and puddles of my own tears it seemed impossible that the world was still spinning, that anyone was still doing something as normal as going to a baseball game.

I was dressed for work when I went to the doctor on Monday morning. I had a list of things to put in order before I went out on maternity leave. We parked in short term parking and I told my office I would be in by ten.

He was five weeks old when he smiled at me for the first time. His whole face opened up and I fell in love. I was a mother. They told me how it would be. They were right. Toys took over my living room. We all got a little more sleep. He grew and changed. So did I.

The doctor said something about low fluid and insufficient growth. The details didn't really matter. I was having a baby. Today. They sent me up to labor and delivery. David went home for my hospital bag. They hooked me up to an IV and I called my office. "I guess I'll see you in November," I said to them. "Sorry about that list." They laughed. I didn't.

I rocked my baby all the way to sleep before I went to find something to wear. The clothes hanging in my closet were foreign to me. I tried some of them on but nothing looked the way it used to. I felt tired, soft, unprepared. I picked the dress that looked the least bad and figured it was the best I could do. I watched him sleep in his crib and wondered if he would be ok without me. If I would be ok without him.

I stepped off the elevator and buzzed myself onto my floor. My key-card still worked. I was surprised. I walked down the hall to my office, trying to summon the lawyer that had lain dormant for four months while the mother became. I opened the door. There was the bottle of water, sitting on my desk.

Right where I left it. 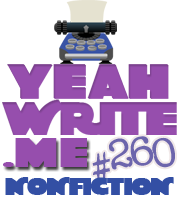