The Table in the Restaurant 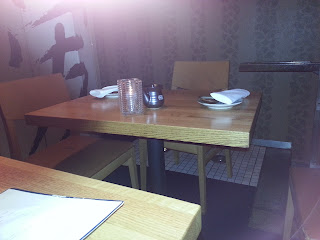 The man and the woman sat diagonally from each other at a small table in the crowded Japanese restaurant.

They were scrutinizing their menus as if the secrets of the universe were inscribed on the pages.

"Can I get you anything to drink?" he asked.

"Just water for me too, and I think we're ready to order," said the woman.

The waiter took out his pad, clicked open his pen.

"Actually, can you hold that order for a second? I have to hit the restroom," said the man, abruptly standing up from his chair.

"I can just go get your water and come right back," said the waiter.

"Don't worry about the water yet, I'll be back in a second," said the man.

And off he went, leaving the woman to wait.

Thirty seconds later he returned. The waiter was still standing there.

"Actually, I have a work emergency and I need to leave, but you should feel free to stay," said the man to the woman.

He grabbed his jacket and hurried off without so much as an apology or a backwards glance.

She stared after him, biting her lip and clutching her iPhone for dear life.

"Are you going to stay?" asked the waiter.

She looked at him blankly.

He stood, waiting, his eyes kind.

She pushed back her chair and stood slowly, put on her jacket, and left the restaurant, blending seamlessly into the stream of midtown commuters, making their way home.