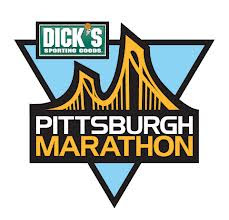 Twenty days from now I will have already (hopefully) crossed the finish line of my second Pittsburgh Half-Marathon. With just two more long runs to go before I board my plane to Pittsburgh, I am already planning for race day. I have my clothes picked out with options for all different kinds of weather, I chose my romance novel for the day before the race - the entirety of which I plan to spend on the couch - and I decided what I'll  be eating before, during and after the race.

The race buzz has begun, and thank god for it.

Because, the truth is, I had some trouble this time around. While training is usually pretty hard, it has been a different kind of hard over the past few months. After we moved, I had a hard time getting used to running on the streets of my new neighborhood after so many years spent running in Central Park, and it wasn't until halfway through my training when I found my new Central Park - The Bronx River Pathway - that I finally started to feel like my old running self.

And I am definitely back, because yesterday. Yesterday started like any normal Sunday. I was already awake when my alarm went off, and was already bargaining with myself.

"One more hour of sleep, and then I'll do my long run."

"No, I should get up now and just get it done."

"Maybe I'll just do six instead of eight."

The voices of my better angels prevailed, and I got myself up and out the door. The sun was up, the breeze was cool, and I had the streets to myself. I ran the mile to the Pathway, and started my now-habitual six mile loop, and the miles were easy. I felt light. I felt strong. I felt fierce.

It was my fastest run, ever.

Watch out Pittsburgh Half, I'm coming for you.
Posted by Samantha Brinn Merel at 3:09 PM