I am Jewish, and I don't celebrate Christmas. That small detail aside, I have always loved this time of year. I love when fall turns to winter, and the air starts to smell like snow. I love the smell of chimney smoke, and I love houses all lit up in tiny white lights. I love Starbucks red cups, and I love when stores break out their holiday bags.

For seven years, until just a few weeks ago, I lived in Manhattan, a place that seems synonymous with Christmas, and I still commute to the city every day to my office in Midtown. There are countless movies set in NYC during the holiday season. On one day in November, the entire world watches as Manhattan is taken over by floats for the Macy's Thanksgiving Day Parade. The stores along Manhattan's iconic Fifth Avenue start decorating their windows well before Thanksgiving rolls around. A giant crystal star is suspended above the Avenue, and there is nary a block without a bell-ringing, Santa-suit wearing Salvation Army volunteer.

And I should love it, because I just love the holiday season. But the thing is, when it comes to Midtown this time of year, I am pretty much a scrooge.

It all started a few weeks ago. I was walking to Grand Central Station to catch my train home, and I was running late. I can usually do the walk in 13 minutes, but the streets were more packed than usual. I was getting annoyed at the camera-sporting tourists when I had real places to go. They were flocking around, and I couldn't figure out why. Until I saw this: 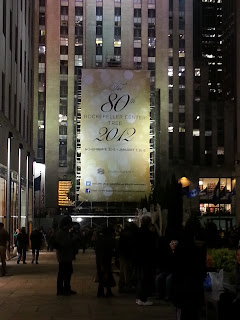 It seems the Rockefeller Center Christmas tree had arrived that morning. There were no lights on it yet, and it was all covered up, but for some reason, people felt the need to stand there and watch it, as if something miraculous was about to happen. It wasn't, obviously. Rockefeller Center would never light the tree without its usual fanfare and cadre of B-List celebs, and besides, the date of the tree lighting was right there on the sign. But that didn't stop the tourists. As I elbowed my way through the crowd, I felt like screaming at the top of my lungs "It's just a tree people."

And then we were off to the races.

Between the thousands of dancers and cheerleaders that invaded Midtown in the days leading up the Thanksgiving parade making running out to grab lunch all but impossible, the clogged streets and closed bus stops around Rockefeller Center making getting from Grand Central to my office a complete nightmare, and the endless throngs of tourists meandering down Sixth Avenue, stopping to take pictures at every turn, I am well and truly sick of Christmas, and the Rockefeller Center tree hasn't even been lit yet, so the worst is yet to come.

And maybe I have selective memory, but I forgot about this little gem: 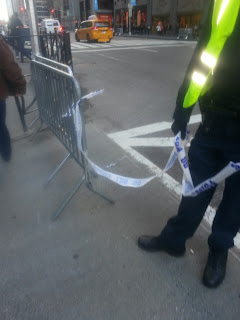 Yes, starting the day after Thanksgiving, and continuing through New Years Day, the traffic police in midtown literally barricade the intersection when the light is green to prevent people from crossing against the light, even when there are no cars in sight for miles.

Since New York City is practically the birthplace of Christmas, I feel kind of bad about being so negative about Midtown in this season of happiness and cheer. But the thought of six weeks of this particular breed of holiday insanity makes me want to curl up in my quiet house in the suburbs, and stay far, far away from the city until January.

But alas. This is where I work. So I will continue making the commute to crazytown each and every day, until the city finally belongs to us again sometime after New Years. I will continue to dodge picture-taking tourists, and to suppress my desire to scream at people who ask me for directions to Rockefeller Center from the corner of 50th and Sixth Avenue (that actually happened).

And when January rolls around, and the city is empty once more, I will probably miss the lights, the decorations, and the noise. But until then, if you see a curly brown-haired girl rushing down Fifth Avenue at 7:00 at night with a determined and slightly annoyed face, get out of her way. She has a train to catch.
Posted by Samantha Brinn Merel at 3:01 PM