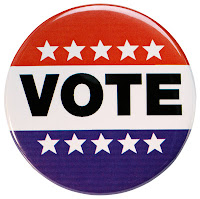 I'm a couple days late on this post, but I really felt like I needed to think a little about the election, and about Tuesday, before writing about it.

Four years ago, I watched closely as a man took the country by storm. He was young and charismatic. He had a beautiful, smart, and stylish wife, and two stunning daughters. For many months he blazed a trail across America spreading his message of hope and change, and America responded. "Yes we can," became the refrain heard across the nation at rallys, on streets, in schools, and in homes. The economy was melting down, people were out of work, and they were scared. And they responded to this man who said, in a thousand different ways, we can make it better. We WILL make it better.

I was not an early supporter of Barack Obama. I thought that he was too young, too inexperienced, not ready for the challenges that come with the highest office in the land. And as a long-time member of the Republican Party, it didn't occur to me in those early days of the 2008 election that maybe, just maybe, Obama was spreading a message that I could get behind.

It turns out that he was. And I did.

I am not sure exactly when it happened, but if I look back, it was probably around the time that John McCain chose Sarah Palin as his running mate, and the rhetoric out of the Republican party turned so violently anti-choice, anti-woman, and anti-pretty much everything else. When the original message of the Republican party nominee - a man I both respected and admired - was drowned out in a sea of vitriol.

That was when I realized I needed another choice.

So in 2008, thinking of human rights, women's right, gay rights, and the balance of power on the Supreme Court, I cast a vote for the Democratic party. And on election night I watched as that young man and his family stood before roaring Chicago crowds and accepted their place in history. And two months later I watched again as he took his oath and ascended his position. And I felt a surprising well of emotion. A keen understanding that I was watching something seemingly impossible, coming true right before my eyes. It was a somber moment of celebration for this country. And I was simply in awe of it all.

And this past Tuesday, thinking once more of human rights, of women's right, of gay rights, and of freedom, I again cast my vote for that man, and watched as he and his family again took the stage. Four years older, four years wiser, and four years stronger, they again made history. And again, I was in filled with awe and pride.

Because this year, I, too, am four years older. Four years further along in this life of mine. And I understand things that I didn't understand four years ago. That I truly do believe in hope, and in change. That I care, deeply, about other people and their freedom. That I want to leave this world and this planet a better, stronger place for my children and my grandchildren. That I want my daughters to have choices, and that I want my children to be free to marry whoever they wish, without judgment and hardship. That hate and judgment push us back, but that love and acceptance can move us forward to places we never even dreamed.

As I joined Diane Sawyer, George Stephanopoulos and the ABC news team on Tuesday night to watch the election returns roll in, I thought of something that Michelle Obama said in her speech at the Democratic National Convention this past summer. Before a packed convention center, she said:

"If farmers and blacksmiths could win independence from an empire...if immigrants could leave behind everything they knew for a better life on our shores...if women could be dragged to jail for seeking the vote...if a generation could defeat a depression, and define greatness for all time...if a young preacher could lift us to the mountaintop with his righteous dream...and if proud Americans can be who they are and boldly stand at the altar with who they love...then surely, surely we can give everyone in this country a fair chance at that great American dream. Because in the end, more than anything else, that is the story of this country - the story of unwavering hope grounded in unyielding struggle."

I was struck by the fact that at that very moment, all over the country, millions of people were sitting exactly where I was, watching the same coverage, thinking some of the same things. For that night, no matter who we voted for, or what we believed, we were united in our quest to elect a leader. To choose the person we thought best able to guide us into the future. We weren't all pulling a lever for the same person, but we were all grasping the handle of democracy. And that, I think, was what Michelle Obama was getting at in her speech, and that, for me, what what election night was about.

It was less about two men battling it out for the right to lead then it was about a country. A country trying to shake off the cobwebs of the past five years, and move forward. A country united in a wish for greatness, and great hope for the future.

This is what we are about, as the First Lady told us so eloquently just a few months ago.

This is our story. And now that we have elected our leader, it is time to continue to write it.
Posted by Samantha Brinn Merel at 1:28 PM