Rascal Flatts was rocking in the background as I stared at my reflection in the mirror and wondered what, exactly, I was thinking when I agreed to go on this blind date.

I hated blind dates. My middle sister had gotten married almost a year before, and ever since then, countless friends of my mom had tried to set me up with a revolving door of single Jewish boys. They felt sorry for me because my younger sister was married, and I was still single. The horror.

Forget about the fact that I was a 24 year old, second year law student living in Manhattan with my best friends. And that I had positively zero interest in getting married just then. I was a single Jewish girl living in New York City, and my younger sister was already married. It just disturbed the natural order.

I generally tried to avoid these painful outings, if at all possible. I had any number of excuses. I was overwhelmed with school work - I was a second year law student after all. I was tired. I already had plans. Maybe some other time (maybe never). And when none of these excuses worked, I lied, often and without a qualm. I was already dating someone. I just got out of a complicated relationship. And once, memorably, I don't want to get married. Ever.

But this was a blind date I couldn't avoid.

I had been hearing about this boy for the better part of a year. He was the older brother of my youngest sister's best friend. The girls were seventeen, and they and their friends decided it would be just so awesome if L's sister married A's brother. It was my sister, and I couldn't really say no.

Which was why, on a late April night, with my federal income tax final exam a mere week away, I was putting on makeup, when I really wanted to be in sweatpants memorizing facts about cost basis and depreciation. I had a real shot at Dean's List: High Honors that semester, and I wanted it more than anything.

We were meeting for dessert, but were we sitting outside or inside? Would there be a walk afterwards? Should I wear comfortable shoes, or the far cuter heels I could barely walk ten feet in?

These were not the kinds of questions I wanted to be dealing with in late April.

For three years of my life late April was for dirty clothes, unwashed hair, and dark-circled eyes. For pens, highlighters and textbooks. For ungodly amounts of caffeine, and junk food when I remembered to eat at all. For cramming thousands of arcane facts and figures into my head and regurgitating the information on command in service of the law school gods.

No, late April was not for blind dates.

Yet here I was, dressed for the first time in a week, and fighting a losing battle with concealer on the aforementioned dark circles.

Screw it, I thought. I'm tired. He'll just have to deal with the circles.

Grabbing my coat and a bag I hoped contained all the necessities, I rushed downstairs to catch the bus that should have been pulling up to the curb outside my building in exactly a minute.

The bus was late. As I stood under a darkening sky, two minutes from being late myself, I mentally cursed my sister, and swore that this would be the last blind date I ever went on for the rest of my life.

Is now my husband. 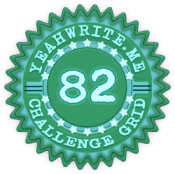 Posted by Samantha Brinn Merel at 9:34 AM