Making the Streets Mine 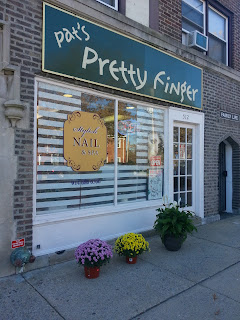 Since moving from Manhattan to our new house this past Friday, I have tried to keep some semblance of normal in my life, which is awfully hard to do when I am living in a house without a kitchen (it is still under construction), don't exactly know my way around (gas shortage due to Hurricane Sandy means we are trying not to drive if at all possible), and don't really know anyone in my new neighborhood.

My mind has been spinning, and I don't seem to be able to hold on to a single thought for more than a few minutes before I am on to something else. The sheer number of details involved in moving in to a new home is astonishing, and I am having a hard time keeping up.

But in the interim, the stomach-churning anxiety is almost too much to bear.

Yesterday morning I woke up early for a Sunday, unable to fall back to sleep. And as much as I wanted to pull the covers over my head and stay there all day long, I knew that wouldn't be a smart move. So I did what I normally do on Sundays. I laced up my running shoes, and headed out the door.

Before we moved, I had planned some running routes around my new neighborhood, and chose a three mile loop. I didn't spent a whole lot of time in our new town before moving, so I relied on my GPS to get me through the run. And as much as I didn't want to go, as soon as a started running, I felt a little better. The streets may have been unfamiliar, and I may have taken a few wrong turns, but when I run, I feel like me. And when I run the streets, I make them mine.

And running, I discovered, is a far better way to explore than driving in a car. I stopped where I wanted to stop, made note of shops and markets and places that might come in handy later, and ended my run at the Dunkin' Donuts down the block from my house.

As I left with coffee in hand, I saw that further up the street were more stores, and walked up, curious about what they were. I found a drug store, a fruit market, and that nail place in the picture up there with the best name I have ever seen.

I made my way home feeling a little lighter, a little happier, and a whole lot less scared of this new place we call home. The streets I ran were not Central Park, and the stores were different from my usual Upper West Side haunts, but I can see them all becoming familiar with time.

This past week has been a roller-coaster of emotions. But running my new streets yesterday, I caught a glimpse of what the future holds for us in our new home, our new life.

And it is bright, indeed.
Posted by Samantha Brinn Merel at 3:08 PM