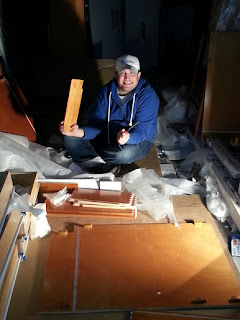 I've been writing a lot about this guy lately. This guy I married two years ago. And of course I knew when I married him that I was lucky, but over the past few weeks, I have come to understand exactly how fortunate I am to have him in my foxhole.

As you know (because apparently I can't stop writing about it), two weeks ago we left Manhattan and moved to our new house in the suburbs. And our house was (and still is) unfinished. Most of the work was done on moving day, but we saved the kitchen for last.

There are things that I am really good at. I'm a good cook. I am supremely organized. I guess I write pretty well. But there are other things I am not so good at. Like anything that has to do with tools. Or technology. Or design and color schemes. Or negotiation. But that guy up there? That stuff is right up his alley. Not only did he entirely design our bathroom, bedroom, and kitchen, but he also hired the people to make his design a reality, supervises them on a daily basis, wired our entire house for cable and internet, and, most astonishingly, turned our garage into a workshop where he built our kitchen cabinets. Every single one of them.

Have you ever seen a cuter screwdriver-wielding guy in all your life?

Oh, and did I mention that he also owns and runs two companies and manages a full staff of employees? No? Well, he does.

And this morning. This morning I was not feeling great. When we lived in Manhattan, on those exhausted, bad feeling mornings, all I had to do was drag myself to the subway, and in fifteen minutes I was at work. But since moving, my commute is now an hour long. On a normal day, I actually enjoy the travel time. But this morning, the prospect of getting in the car to drive to the train station, sitting on a rocking train for half an hour, and getting myself to the office was just overwhelming. It was just one of those mornings. You know the ones.

But I was a good soldier. I got myself up and into the shower without incident, all the while dreading my journey to work.

But ten minutes later, when I came out of the bathroom, that guy up there was awake and dressed, with keys in hand. And even though he doesn't have to be anywhere near Manhattan today, he drove me all the way into work so I didn't have to take the train.

And during that 20 mile ride, our conversation ranged from coffee, to kitchen appliances, to Tom Clancy, to our little niece, to James Bond, to Star Wars, and beyond.

Now, I ask you, is that a guy or what?
Posted by Samantha Brinn Merel at 9:15 AM