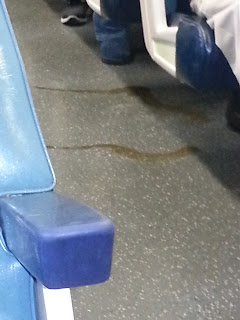 As most of you probably know, about two months ago I moved to the suburbs and now commute to Manhattan for work every day via Metro North Railroad. And after the past two months, I have the commute down to a science, and have even started to really enjoy the 31 minute ride and the time it gives me to zone out, read a few chapters, or brainstorm blog ideas. I don't think it is an accident that I feel like I have really hit my stride on this blog since I moved to White Plains.

Needless to say, my Metro North commute is far different than the NYC Subway commute that I did for the seven and a half years I lived in Manhattan. For the past couple of weeks I have been considering a blog post listing all the different ways commuting from Westchester is more civilized and humane than commuting on the Subway (like, for example, alcohol is allowed on Metro North, and there are even little kiosks in Grand Central that helpfully sell beer and mixed drinks at a discount to Westchester commuters). I was planning on posting some sort of top ten list, and was waiting until I had enough information stored away to make you all understand just how different these two commuting experiences are.

Well. This morning I saw something - just one thing - on the train that encapsulates the entire difference between Metro North and the Subway. A top ten list is no longer necessary. My list is now exactly one item long.

As the train was pulling away from White Plains this morning, a man sitting a few rows in front of me put his cup of coffee on the floor while he took off his jacket (oh, did I mention that Metro North kindly provides hooks at every seat on which to hang one's jacket?). When he was sitting back down he misjudged his footing, and accidentally knocked over said coffee cup, spilling its contents onto the floor. The velocity of the train caused the spilled coffee to stream from its point of origin, and head towards the feet of the people across the aisle.

Now. I noticed all of this with about half of my brain. Not because I was tired or anything, but because I am a former Subway commuter. During my seven-plus years on the Subway, nary a day went by where I wasn't dodging some mysterious liquid or food-stuff that ended up on the floor of the Subway car. Once I even had an entire cup of coffee dumped on my spotless white shirt by some reckless fellow passenger. Subway riders are always holding far more than they can reasonably carry, and for some reason they think adding a cup of steaming hot liquid is an excellent idea. Accidents ensue. On the Subway, no one bats an eye when there is coffee on the floor, or when empty bags of chips get stuck to your shoe by chewed gum, or when there are giant rats scampering up and down the tracks. That kind of mess is just the price of doing business.

Being used to that kind of daily disorder on my morning commute, this coffee accident harmless in comparison, and I turned my attention back to my book.

Well, I may have dismissed this morning's coffee accident as harmless, even as it was happening, but not so for my fellow Metro North commuters. As the poor man put his coffee cup on the floor, the man across the aisle was eyeing the cup like a hawk. And when it spilled, and was basically ignored by its owner, the man across the aisle went out of his ever-loving mind. He immediately sprang into action, rallying fellow passengers for napkins to clean up the mess, while giving the owner of the coffee cup the evil eye. If looks could kill, I'm telling you. He alerted everyone in the vicinity to pick up their feet, and to take their bags and purses off the floor, lest they be attacked by the errant streams of coffee. Apparently, Westchester commuters just don't do coffee spills on the way to work.

And as I flipped through my mental files of the past two months, it occurred to me that this was the very first spill of any kind I have seen on my morning train, and that I have never, ever seen trash on the floor of my Metro North cars.

Toto, I don't think we are are on the Subway anymore.
Posted by Samantha Brinn Merel at 11:39 AM