The Camels on 51st Street 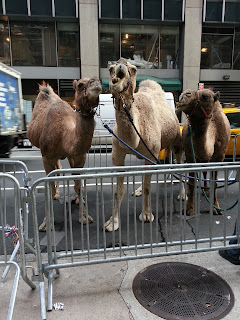 Last week, on my way to work, I saw some camels on 51st street. Those ones up there. And while I had spent much of the week on this blog complaining about the hysteria of Midtown Manhattan this time of year, seeing the camels pushed those dark thoughts away. Because, as I said, any place where you can accidentally bump into camels on the way to work is a place worth staying connected to.

I spent the rest of that day laughing about my absurd sighting, and sending the pictures of those desert beasts around to everyone I could think of. Strangely enough, I didn't think too much about why they had been standing there in the middle of the street. Because in New York, when you see something weird, it's often best to just enjoy it and not spend too much time asking why

Well. It turns out that my camel sighting was something of an enigma.

Imagine my surprise when, the following day, I flipped to the Metro section of the New York Times and saw my furry friends, front and center, above the fold.

It seems that the camels, named Carol, Ted and Gabby, are part of the infamous Radio City Christmas Spectacular. The show runs four times a day during the holiday season, and every now and then during the day the camels get a break. Between shows, they are walked around the stage for exercise, and sometimes they get to come outside for some light and fresh air.

Not groundbreaking news by any stretch of the imagination.

But what makes this story New York Times worthy is that apparently, the timing of the camels' 51st Street appearances is a secret more closely guarded than the formula for Coca-Cola. Very few people in the theater know when the camels take their outdoor jaunts, and the ones who do know certainly are not telling. Some intrepid camel-watchers have even taken to staking out the 51st Street entrance to the theater for hours waiting for the camels to emerge, and begging stagehands at Radio City for intel. But the people who work at Radio City are protecting their creatures and playing it very close to the vest.

After reading the article, I spent a couple of days thinking about how lucky I was that I happened upon this mythic sighting, and how it was truly a once-in-a-lifetime experience (Because, camels, on a New York City street).

And then, on Monday morning, I saw them again. I was walking my regular Grand Central-to-office route, and there they were, gracing 51st Street with their majestic presence once more. And after seeing twice by accident what people have been waiting hours to see just once, I feel almost mythic myself.

Because twice now I have seen camels in Midtown. And that is pretty spectacular.

Posted by Samantha Brinn Merel at 9:56 AM