She was already awake when her alarm went off. She kissed her still sleeping husband and swung her legs out of bed. Shuffling slowly to the bathroom, she thought of how many mornings had started just like this over the years. Hundreds; no, thousands for sure. She chuckled as she reached for her toothbrush and looked into the mirror.

A few more wrinkles now than on that first morning, she thought. Lord I'm getting old.

As she dressed, she caught a glimpse of a picture that none of her protests could convince her darling husband belonged in a drawer, not centered on their dresser. The past and present seemed to collapse together and for just a moment she was twenty years old again, filled with the nervous anticipation and restless excitement of her very first race morning.

Then she blinked and she was back in her bedroom, looking at a picture of her twenty year old self after her very first race. The first of many.

"We certainly had some times didn't we my girl?" she whispered to the picture.

As she made her way through her house, soaked in memories of races past, she could still feel that race day buzz. Oh how she loved that buzz. For sixty years she fed off of it, relished it, and used it to propel herself forward for unreasonable distances. It had been ten years since she hung up her running shoes. She was a spectator now. But she would never forget that buzz.

She wasn't bitter. Far from it actually. She had sixty good years, Far more than most people get to have. At age seventy her knees finally got the better of her, and she was relegated to long walks with her man and her dog. Every evening they walked the streets where she once ran, and she was happy. And every May she set up her chair on the corner by the bridge and watched the runners come streaming by. And if she was a little jealous, she figured that was only natural. Once a runner, always a runner. That's just the way it goes, she knew.

It was eight o'clock and steaming hot outside when she settled into her chair. She knew the starting gun had just gone off, and even though it would be over an hour before she saw any runners pass by, she could picture where the leaders were. She knew every twist and turn of the course. She ran this race seventeen times. Ten Mays before, this race had been her last.

As the pack started to thicken, she watched closely, looking for the runners that needed a little boost. She could always spot them, because hundreds of times over the years, she was one of them. Late in the race, energy flagging, wondering if she had enough to finish. And there was always a spectator who helped push her along. Who gave her the confidence to finish. She loved being that spectator now. She thought it was her little way of paying it forward after sixty years of racing.

She saw the girl coming from five or six blocks away. She was moving slowly, hunched over, and had that look on her face that said she would rather be anywhere than here. She didn't stand up because the girl was looking down. She leaned forward in her chair and didn't take her eyes off the girl as she shuffled down the street. When the girl was a few yards away their eyes finally met. She could see the pain and exhaustion on the girl's face. She looked straight into the girl's bright green eyes and said,

The girl seemed to stand up a little straighter and the fog cleared from her eyes. She looked at the woman for half a second more before making the turn onto the bridge. Her pace picked up, and the woman watched her until she disappeared into the distance. A wave of affection swept through her for that young girl, fighting like hell to the finish. That was a feeling she understood.

She stayed in her place on the corner as morning became afternoon, until the second set of police cars came by, signaling the final runners in the race. Then she gathered up her chair and headed for home.

She walked in the door of her house, and straight to the computer. She called up the website she needed and typed in the number she had jotted down on her newspaper. The girl's bib number. When the results loaded, her smile reached all the way to her eyes. The girl finished. Her final mile her fastest of the race.

She looked up from the screen as her husband came down the stairs.

He reached out for her hand, and off they went on their evening walk, along the streets where she once ran.


This, my first attempt at fiction, is dedicated to all the commenters on my post from last week who wondered about that old woman's story. Thanks for helping me wonder too. 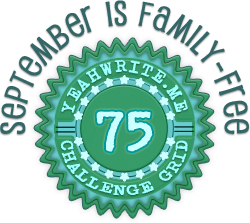