Words From a Stranger 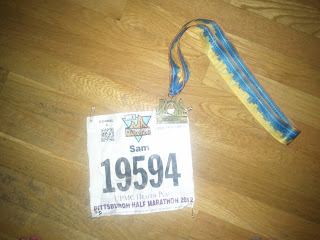 I heard the words at the end of mile twelve as I struggled to keep on running.

I had never seen the woman before in my life, but she spoke those words directly to me as if we had been friends forever. The last four miles had been a slow plodding mess and I was giving serious thought to pulling over to the curb and quitting right then and there, but when I heard those words, I kicked up the pace.

It was just after mile eight of my first half-marathon that I decided I would rather be in hell than run five more miles, which was incredibly unfortunate for me, because I really wanted a medal. Which they were giving out at the finish line. Exactly five miles away.

Bands were stationed every half a mile, playing music. Spectators covered every available inch of sidewalk. For eight miles I relished the encouragement. I smiled, waved, and high-fived my way along that glorious distance. After mile eight I hated every last person lining the streets and the chairs they were relaxing in as they shouted at me to "go girl" and "keep running."

"YOU keep running," sneered the petulant toddler who had suddenly taken up residence inside my head.

With no choice but to keep moving, I slogged my way down streets softening in the blazing heat that was so unseasonable for Pittsburgh in May.

My running shorts, so perfectly arranged during the first half of the race, had started to bunch up between my legs, causing an excruciating heat rash that no amount of Vaseline from the medical tent would fix. My beloved running hat felt like a sponge that had reached its capacity. The faithful running shoes that had carried me though endless training miles were giving me a blister on my toe. The cups at the water stations were filled with boiling hot liquid from hours in the sun.

My internal dialogue was an endless string of jerky thoughts.

I really hate this song. I definitely have heat stroke. Why would this band play such a stupid song? I hate running. I think I have a cramp. And shin splints. And probably a stress fracture. I. Hate. Running.

I very nearly laid right down on the street and forgot about the rest of the race, but I figured that if I did I would probably just end up trampled by the rest of the runners and with a third degree burn from the heat radiating up from the pavement. Not exactly an improvement to my current situation.

Two miles to go. Might as well be two hundred.

Other runners were passing me by the dozens, and I was moving so slowly it was a wonder I was making any forward progress at all. I was mentally cursing myself, and ruing the day I pressed "submit" on the registration form for this god-forsaken race.

Never again. No way in hell.

I saw the woman as I made the turn onto the bridge that signaled the start of the final mile. She was sitting in a lounge chair right on the corner. Her white hair was ablaze in the sunlight; rivulets of sweat trickled down the maze of wrinkles lining her face. Her gnarled hands gripped the arms of her chair, and her bottomless blue eyes looked straight into mine.

A wave of affection swept through me for this elderly stranger who sat all morning in the sun, cheering so fervently for runners she didn't even know, and I stood up a little straighter. I could do this. I could finish.

Gritting my teeth, I started to fly. Over the bridge. Up the final hill to the top, where I could see the finish in the distance. The crowds were roaring, and my brain played the woman's words over and over, pushing me down the final stretch.

I don't know who she was, and I don't know her story, which seems strange considering how big a role she played in mine. I hope I see her next year at the start of the final mile, but if I don't, I'll certainly hear her words in my head as I make the final turn towards home.

I'm proud of you, you're almost there. 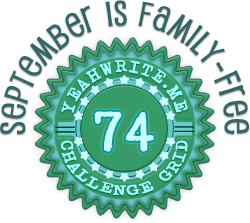 Joining some amazing writers who blog and bloggers who write over at Yeah Write.
Posted by Samantha Brinn Merel at 9:27 AM