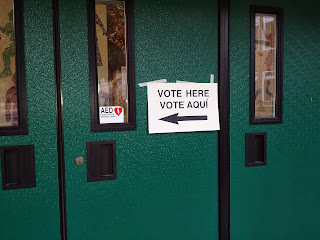 I stood in front of a "Vote Here" poster and looked up and down 72nd street.

I had lived on this Upper West Side street for two years. Had walked up and down the block countless times, eaten at the many restaurants lining the street, and shopped at the stores. There was the bodega on the corner where I bought sodas from an elderly man and his wife, the kosher store I stopped at every Thursday afternoon, the record store that we always assumed was a front for something far more sinister than music, and the Duane Reade we frequented for all those things you don't think you need until you do, usually at 3:00 in the morning.

This was my street. Except now it wasn't.

It was 8:30am and the street was teeming with people going to work, kids going to school, and the habitual chaos that is Manhattan on a weekday morning.

I was a part of this morning routing for so long that it became normal. But as I stood in line at my polling place on that first November Tuesday last year, I watched from the sidelines as the morning unfolded. Observing it with the eyes of an outsider.

I shouldn't even have been voting at this polling place. We had moved out of Manhattan to our new suburban home four days before, but we hadn't yet changed our voter registration.

It would never occur to me not to vote, so I stepped up to the table and gave a volunteer an address that was no longer mine. And I wondered if she would see that I didn't fit it. If she would know that five days before I had walked this neighborhood like I owned the place. But on that Tuesday those streets, and that city, didn't belong to me anymore.

I walked to work with a heaviness made up of a toxic cocktail of uncertainty and fear, and went home that night to a brand new house with an unfinished kitchen in a neighborhood where I still needed GPS to get to the grocery store.

I wasn't sure what was mine. Or if anything would ever feel normal again.

Yesterday morning my alarm rang at 6:30am.

My brain barely engaged, I rolled out of bed and into the shower. I got dressed, walked out the door, walked back in twice for various things I forgot, and drove to my neighborhood middle school to vote.

I stood in front of another "Vote Here" poster and looked up and down another street. I waved to some of my neighbors, also stopping by to vote on their way to work, and then stepped up to the table and gave a volunteer an address that was very much my own.

And then, with a quick stop at my regular coffee shop on the way, I headed towards the train station to start my day.

Suddenly, and without my even realizing it, what was once so new had become normal. 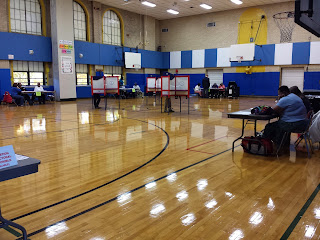 Posted by Samantha Brinn Merel at 9:36 AM