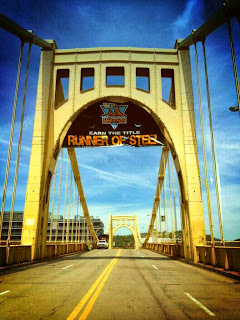 Three years ago, I decided to run a full marathon.

It was November 7, 2010, and I was standing on the corner of 96th Street and First Avenue in Manhattan, otherwise known as Mile 18 of the New York City Marathon. I had just registered with a friend of mine for my very first half marathon through the Leukemia and Lymphoma Society's famed Team in Training, and the head coach asked us to come stand at a TNT cheer station on the marathon course as a little motivation before our training season began.

So on that unseasonably cold fall day, we joined the sea of spectators and, cowbells in hand, cheered for the purple-clad TNT runners as they made their way up to the Willis Bridge which would take them into the Bronx, and through the home stretch of the Marathon.

Having grown up with two distance runners for parents, I was no stranger to the mystique of the marathon. One of my first really clear memories is actually cheering for my dad when he ran his first. So running was in my blood.

I had tried, unsuccessfully, to become a runner for years. There was a stretch in high school when I would run three miles after school a few days a week, but by the time senior year arrived with its SAT and college application mania, that habit had fallen away. Then there was that time in college when I dabbled in distance running, but there always seemed to be something better to do, like eat pizza, or frequent the soft serve machine in the cafeteria.

But five years after college, when I found myself still carrying the 20 extra pounds caused by the aforementioned pizza and ice cream, I decided to try again. This time I was determined to make it stick.

I got rid of those 20 pounds and then a few more. Central Park became my home and it was there that I really learned to run, and to love to run. And when we left the city last year, it was running that helped me through the anxiety and confusion that came from the move, and from trying to find a place for ourselves in our new suburban home.

I missed that Team in Training half marathon due to injury, but the following year I ran my first half in Pittsburgh, and then last year I ran it again. And when I crossed the finish line for the second time, I knew I was ready. I knew that I would be back next year, and I would run the whole thing.

I registered this past Tuesday, so exactly seven months from tomorrow, I will line up in downtown Pittsburgh at dawn with 26.2 miles stretching ahead of me. I will run the streets of the city of my heart, and fulfill a dream years in the making.

Here we go.
Posted by Samantha Brinn Merel at 4:00 PM