The first thing I saw when I arrived at the Pittsburgh airport last Friday morning was this sign: 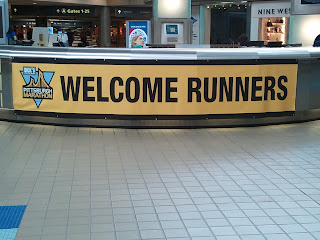 It was a stark reminder that this was not just any weekend at home. This was The Weekend. The weekend I had been waiting for, and training for for nearly half a year. It was Race Weekend. I was one of those runners they were welcoming. And it was time.

Our first order of business was the race expo to pick up my number, t-shirt, and assorted other sponsor paraphernalia. We made our way downtown to the Pittsburgh Convention Center, just a few short blocks from where the starting line would stand in 36 short hours. And there was a buzz in the air. Of excitement. Of nerves. Of anticipation. A heady mix of emotions that would propel thousands of runners through the next day-and-a-half of fueling up for the grueling miles to come.

I spent the day before the race on the couch. The entire day. Getting up only for meals and multiple trips to the bathroom due to intense hydrating. I'm sure many runners spent Saturday reading race material. Familiarizing themselves with the course. Where the water stops and bathrooms were. Where all the turns were. But not me. Definitely not. Keeping me company on the couch was the second book in Nora Robert's Boonsboro Inn Trilogy, The Last Boyfriend. I read the entire thing that day. I figured that if the race got tough, I could spend some happy miles replaying Avery and Owen's romance, thinking about the events that might shape book #3, and bemoaning the long wait before that book will grace the shelves of my local Barnes & Noble. It was a good day.

Before I went to bed, my dad, an amazing multiple-marathon finisher himself, gave me some race advice. "It's just another training run," he said. Simple advice. And as I would later find out, impossibly wise.

I wasn't really sleeping when my alarm rang at 5:30 on Sunday morning. I'm sure I must have slept at some point that night, but I really can't remember. I got dressed in a hurry. I was ready. My mom drove me downtown to the starting line. At 6:15am, more than an hour before the race was set to begin, it was already teeming with runners. Some were warming up along the sidewalks. Some were stretching out, legs propped up on any available surface. Some were walking alone, their faces masks of intense concentration. Some were walking in groups, laughing with excitement for the hours to come.

For nearly an hour, I stood in my assigned race corral. I chatted with people around me, heard some of their stories, and told a little of mine. I thought about my months of training. The weeks I was forced to rest because of injury. And I wondered if it would be enough.

Suddenly, the crowd erupted in a huge cheer. And slowly, we started to move. 7:30am. It was time. It took nearly 20 minutes to make our way to the starting line. Already, there were people lined up along the sidewalks shouting words of encouragement. And then, we were there.

And I was off and running.

For 9 miles, the race was amazing. I made my way through Pittsburgh's most iconic neighborhoods. Smiled at the spectators who lined the course. Marveled at how lucky I am to hail from such a beautiful city. Though about how, after nearly two years of trying, I could hardly believe that I was finally running this race. That I was lucky enough to be here. Running these streets, and bridges draped in banners like this:

I was glad, so glad, that I left my headphones at home. So happy that my ears were open and free to soak up the experience. To hear the music, the cheers, and the excitement. I didn't want to forget even a minute of this exquisite day.

Then, just after I passed the yellow flag signaling that I was about to start my 10th mile, something happened. The run stopped being easy. Stopped being fun. My legs started to slow down. Started to feel like lead. I could barely put one foot in front of the other. 4 miles to go. Might as well have been 400.

For the first time, I really thought I might not finish. Then, I heard my dad's voice in my head. "It's just another training run." So in my mind, I went somewhere else. I was no longer on the streets of the South Side of Pittsburgh. I was running my Park. Central Park. That inner 4 mile loop I know so well. Have run so many times. I imagined myself running up the rolling hills of the West Side. Turning on 102nd street. The familiar sights and sounds of the east side. And the 72nd street transverse looming ahead.

"It's just another training run." Simple advice. And impossibly wise. And I kept on running.

At the end of mile 12, there was a hill. Not a big one. But after almost 13 miles, it felt like a mountain. At the top of the hill, with less than a mile left to go, I saw it.

And once I saw it, I put my head down and started to fly. I barely remember that last half mile. The people cheering along the sidelines were a blur. I might as well have been alone on the course for all the attention I paid the other runners. At the flag signaling 13 miles, with one-tenth to go, I started to sprint. Every ounce of my being focused on crossing that final line.

And I did. With my head up. And it was amazing.

And today, as I hobble around on sore legs with seemingly endless exhaustion, I think back on this past weekend with pride. Because I did it. I finished strong. I finished happy.

And I already can't wait until the next one. 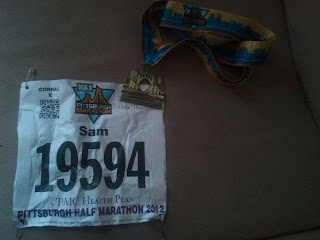 I am happy to be linking up today with The Extraordinary Ordinary for Just Write. 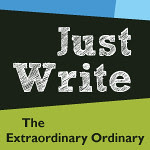